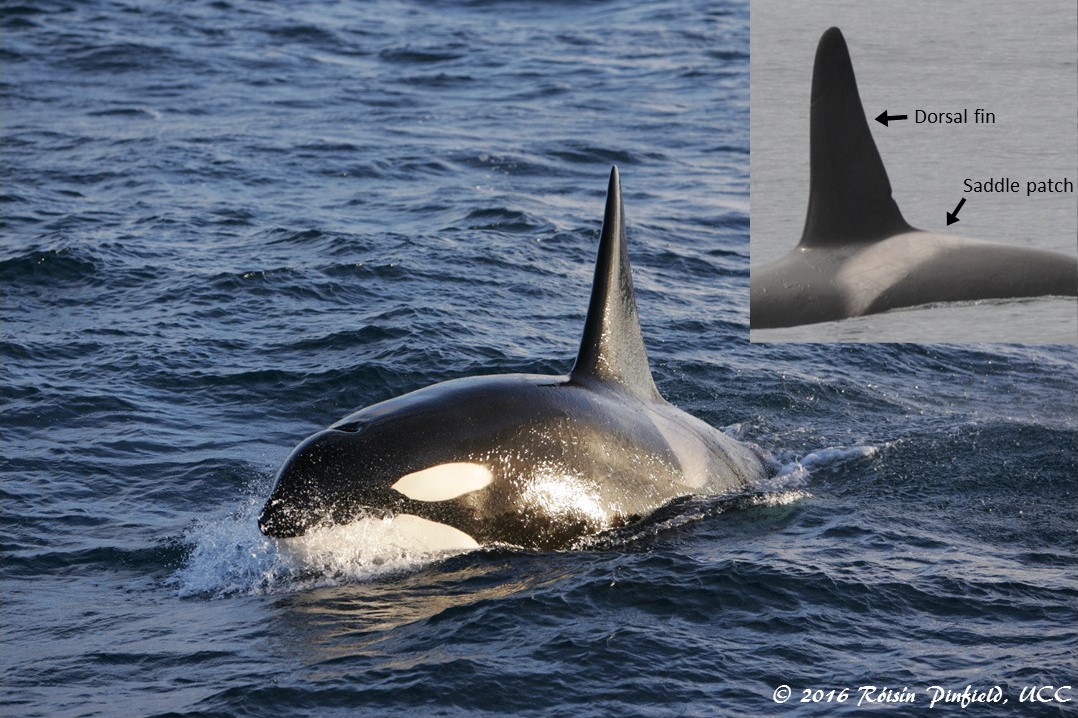 Róisín Pinfield from the School of Biological, Earth and Environmental Sciences in University College Cork is studying the killer whales that forage around the pelagic trawlers during the Northeast Atlantic mackerel fishing season as part of her PhD. The three-year project is a joint Enterprise funded project from the Irish Research Council and the Marine Institute. Killer whales, or Orcas, are the largest of the dolphin species and one of the world’s most powerful predators.
?
While known to skippers for a number of years, Róisín first noticed killer whale behaviour around fishing vessels for herself while out on the vessels as part of a BIM project in 2010/2011. During this time, there were numerous sightings of killer whales foraging around the Irish mackerel pelagic vessels, footage of which has been documented recently on TG4 Cogar series: Snámh in Aghaidh Easa. It is likely that this interaction between killer whales and mackerel pelagic trawlers is relatively recent in this region. The first reports date back to the early 1990s with killer whales foraging around mackerel freezer trawlers northeast of the Shetlands. Prior to this, killer whales were known to interact with mackerel purse seiners and, as such, the killer whales may still be in the process of adapting their foraging strategy around the pelagic trawlers. A study in 2006, reported observations of killer whale foraging around Scottish trawlers north and east of the Shetlands. However, there were no observations to the west and so it was not obvious if the killer whales followed the mackerel migration and the fishery westward. However, recent sightings show killer whales are also foraging around the fleet to the west of the Hebrides and south along the continental shelf into Irish waters. Whether this is a separate group of killer whales or the same as those seen around the Shetlands remains unknown. Killer whales are top marine predators in our oceans and as such, they are useful indicators of the health of marine ecosystems. Understanding population structure and more about their feeding ecology will improve the conservation needs of these top predators.
?
The planned research involves two researchers boarding the trawlers during the mackerel fishery to take photographs of each individual (for identification) along with obtaining skin samples using biopsy darting. The key questions we are aiming to answer are; Is there a single population of killer whale specialising year round on mackerel or are there several killer whale populations in the Northeast Atlantic coming together to use the mackerel as a seasonal food supply? Are they just feeding on mackerel or do they forage around horse mackerel hauls too? Is a certain gender or age class benefitting more from this feeding strategy? Where do they go at other times of the year? Are they related to any of the other killer whale groups known in the Northeast Atlantic? The research will involve comparing identification photographs and DNA from the skin samples with those obtained by researchers from other countries in the Northeast Atlantic in an attempt to reveal more about this particular group of killer whales.

The success of the project is heavily reliant on the good will of the skippers to allow Róisín and her research assistant to board their vessel. So, Róisín would like to put a call out to any of the fishermen involved in the mackerel fishery for a berth on their vessel for a trip this winter. She would also like to thank the skippers who have already allowed her to do so. Róisín would also be really keen for fishermen to get involved themselves in the research. If anyone would be willing to record time, date and positions of any killer whale sightings throughout the pelagic fishing season she would be very grateful. Any photographs of the animals would also be extremely useful for her research. In particular, it would be great if the pictures could include the dorsal fin and saddle patch like that shown in the insert in the above photograph. Any information regarding the killer whales, questions or queries are welcomed and can be directed to
R.Pinfield@ucc.ie
or 087 1210121.

Please note that all research activities are covered by University insurance and a biopsy permit will be obtained from the National Parks and Wildlife Service and the Health Products Regulatory Authority before the research recommences.