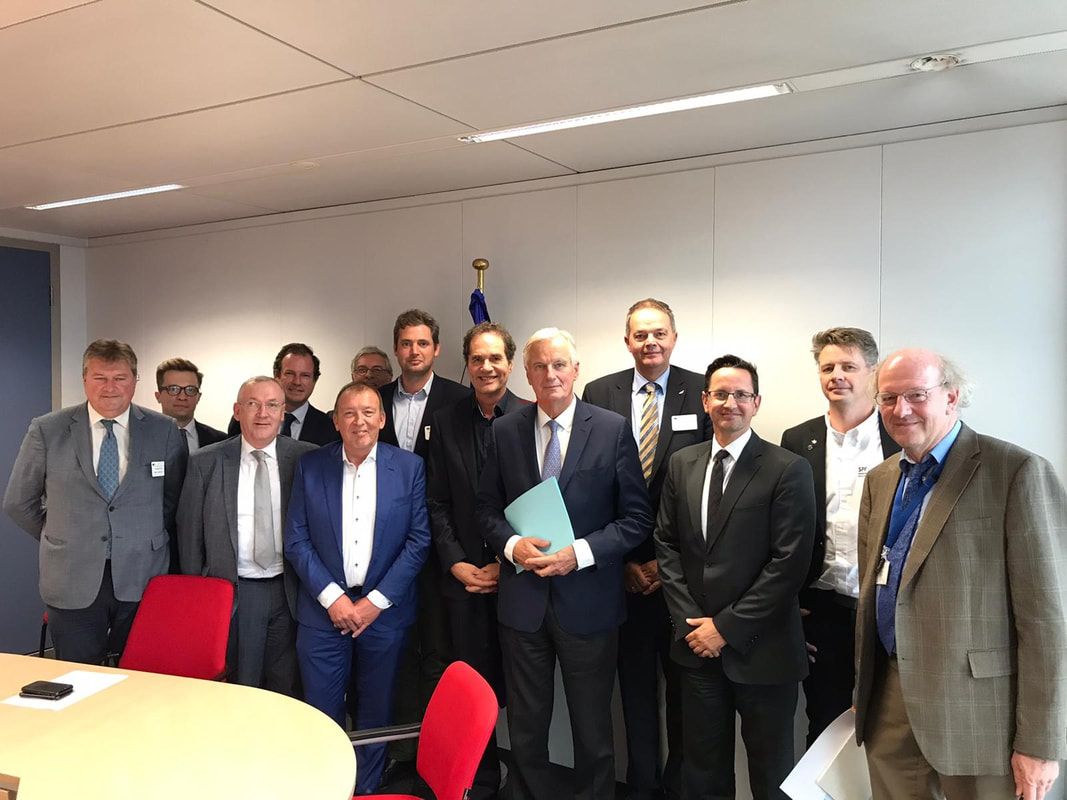 The EUFA delegation including Killybegs Fishermen’s Organisation CEO, Seán O’Donoghue which met EU Chief Brexit Negotiator, Michel Barnier in Brussels
EU fisheries’ concerns highlighted to Chief Brexit Negoti
ator
?
?The Chief Executive of the Killybegs Fishermen’s Organisation has expressed his confidence that EU Chief Brexit Negotiator, Michel Barnier, is unequivocally supportive and committed to working for the European fishing fleet as Brexit fast approaches. Seán O’Donoghue was part of a European Fisheries Alliance (EUFA) delegation which met Mr Barnier in Brussels this afternoon [September 25th].
Speaking following the meeting, Mr O’Donoghue said he was very pleased with the frank and very constructive exchange of views as well as Mr Barnier’s unwavering commitment to achieving a balanced Brexit agreement that lays the foundations for a strong future relationship.
“There is a deep appreciation by Mr Barnier and his team of the major issues facing the industry in both a “Deal” and “No-Deal” scenario,”
said the KFO CEO.
“We emphasised that even if the withdrawal agreement and/or the political declaration were to be amended in this final phase, the close linkage between fisheries and the wider trade relationship is essential. Mr Barnier fully supported this linkage. Negotiating our future relationship in fisheries in the overall context of the Future Trade Agreement (FTA) is of paramount importance to maintain existing access to fishing waters and existing resource allocations and must therefore be addressed in the overall political context
.”
Mr O’Donoghue continued: “
Should Irish and other EU fleets be denied access to UK waters after midnight on October 31st next, there will be flash points all across Europe in the Irish Sea, North West of Donegal, off the South East Coast of Ireland, the English Channel and in the North Sea in scenes potentially reminiscent of the cod wars of the 1940s, ‘50s and ‘70s.
“
Legal uncertainty at sea would have grave consequences for the sustainability of shared stocks. The current joint fisheries management framework is working and has greatly improved sustainability of shared species.”
“
As a former French Agriculture and Fisheries Minister, Michel Barnier understands all-too-well what could lie ahead”,
concluded Mr O’Donoghue.
He stressed that it wasn’t too late to avoid a ‘no-deal’ Brexit and reiterated his assertion that the one industry which is completely and uniquely exposed to anything other than an orderly transition, is the Irish fisheries sector. Last year, our seafood industry was valued at €1.25billion employing more than 14,300 people with this economic footprint predominantly in rural, coastal locations.
ENDS
Further information:
Seán O’Donoghue
(087) 4196535